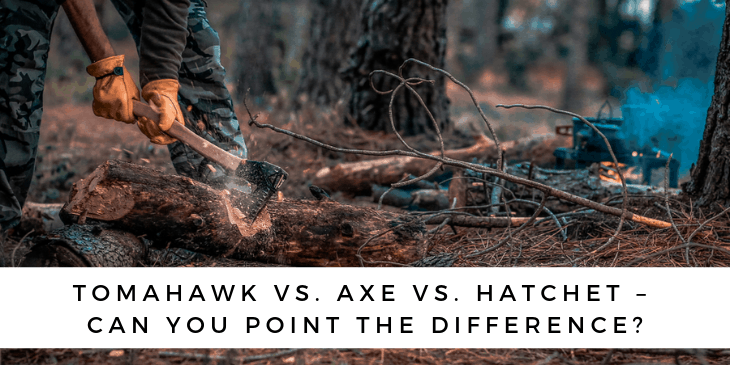 Tomahawk Vs. Axe Vs. Hatchet – you have probably used all of these during your hunting or camping feats. Contrary to what most people think, these tools are not so similar at all. In fact, there are quite a few differences between them, all of which sets them apart from each other and makes them suitable for different uses.

All of these can usually be used to perform similar functions. However, you will get a lot more benefit out of them without using as much energy or resources, once you get to know the particular use of their functions. They will work better and with more sophistication once they start to carry out the tasks that they were equipped for.

Proper knowledge regarding these tools can thus be beneficial to you for choosing which tool serves your purpose the best.

Deadly and accurate- these are the perfect words to describe this genius tool. The best tomahawk tool was mostly used by North American Indians for various purposes, such as hunting, cutting logs, making shelters and so on.

Features of a Tomahawk

No need to boil your brains out, this is a pretty straight forward tool which is being designed and used by people for over thousands of years.

Features of an Axe

A hatchet is a miniature axe. The handles are shorter in length and are designed to be used by one hand.

READ ALSO:  What’s the Difference Between: Cordura Vs. Ballistic Nylon?

The handle is either made of wood or some other thing that is very lightweight so that it can absorb impacts more quickly.

Differences noted about Tomahawk Vs. Axe Vs. Hatchet

Now that you know about the product features, let us dive into the differences between the products. Although the main concept of the products is the same, they are still unique in a lot of ways.

The most notable difference observed is that both tomahawks and hatchets are single-handed tools. Axe, on the other hand, is double-handed.

Due to the difference in handedness, tomahawks and hatchets are way better and easier to use. They also provide protection when faced with adverse situations!

Axe, on the other hand, has a double-handed feature, which allows it to be mostly used mostly for heavy purposes.

Among the three tools, the hatchet has the lightest body-weight and are preferred for expeditions and easy carrying. The axe is the heaviest among all three, and it has a relatively heavier haft.

Both axe and hatchet have narrow eyes near the handle while a tomahawk has a rounder eye.

The handle of the hatchet is the shortest among all three. Tomahawks have a little shaft, which are not present in the other two.

The cutting edge is sharper, and more pointed in an ax than in the latter ones. The second sharpest edge is the tomahawk. The hatchet has a less sharp edge and is not suitable for heavy activities. The sharpness of the blade is a primary factor to consider for any type of use.

The most suitable tool for splitting logs is the ax, and next in line comes the tomahawk. The hatchet is not designed for the splitting of logs but can be used to frame timbers to its desired form.

Due to its heavy blade and the single-handed feature, the most appropriate one to be used as a weapon among all three is the tomahawk.

Although tomahawks, axes, and hatchets are remarkably similar due to their identical shapes and features, they have many differences between them.

So, it is essential to identify which tool serves which purpose, so that it is easier to for us to choose. Good knowledge of their distinguishing features can thus be of utmost help and assistance while dealing with tools falling under this category.

This site uses Akismet to reduce spam. Learn how your comment data is processed.